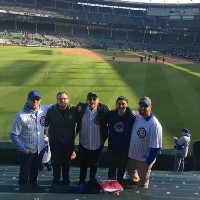 The Los Angeles Rams were the talk of the league in 2018 thanks to a highly productive offense, an offensive genius for a head coach and a 10–1 record prior to their Week 12 bye (which included a Week 11 matchup against the Chiefs that saw the third-most points scored in a single game in NFL history). They were basking in the glow of numerous notable pickups — including Aqib Talib, Marcus Peters, Ndamukong Suh and Brandin Cooks, among others — and their already established stars in Todd Gurley and Aaron Donald.

L.A. finished the year as the NFC West champions with a tie for the best record in the league (13–3). They took that momentum into the playoffs as they ended up winning the NFC, but ultimately fell short in the Super Bowl with a disappointing showing against the New England Patriots. The success they had last season is sure to give them confidence as they prepare for the new campaign, but that poor performance in the Super Bowl definitely has them hungry for more in 2019.

After making it to the Super Bowl last season, the Rams did not make too many major additions to their roster. The only major additions they made were the signings of three veteran players in LB Clay Matthews, S Eric Weddle and QB Blake Bortles. Matthews and Weddle will certainly factor in on defense, but Bortles was not added as a threat to incumbent starting QB Jared Goff. Instead he will assume the backup duties, and will only receive snaps in times of blowout games or injuries to Goff.

The team did suffer a larger amount of departures, and both sides of the ball were affected. The offense lost their backup running back in C.J. Anderson, and they also lost a pair of starting offensive linemen in G Rodger Saffold and C John Sullivan. While their running back depth is not a major issue, the holes left in the offensive line are definitely a bigger blow. C Brian Allen and OG Joseph Noteboom are currently penciled in to the starting lineup, but it is uncertain what the Rams will get out of them.

On the other side of the ball they took a significant loss at each layer of the defense. At the line they lost Suh to free agency, and, although he isn’t exactly Donald, he did provide a dominating presence in the trenches. At the second level they lost LB Mark Barron, who was always a strong member of the linebacking corp after converting over from the safety position. And S Lamarcus Joyner is also no longer with the team, after he signed with the Hard Knocks squad in the Oakland Raiders this off-season. The additions of Weddle and Matthews certainly help offset the production from those they lost, but if Michael Brockers does not step it up on the line they could be more vulnerable up the middle even with Donald there.

Where some teams are stretched thin on viable fantasy options, the Rams have fantasy potential out the wazoo.

Their defense (as questionable as they were overall from Weeks 4 to 10) finished as D/ST 3 last year, and Greg Zuerlein — AKA Legatron, AKA Greg the Leg — is a dominant kicker in fantasy when he is healthy. Missing Weeks 2 to 6 really hurt his production last season, but he was still a beast through the rest of the season when he returned. Both are currently being drafted at or near the top of their respective positions, and if things go similarly to last year they could finish in the top three.

The offense is what has people excited, and for good reason. Goff broke out last year with 4,688 passing yards, 34 total TD and a finish as QB8 on the season. He is in line to have another strong campaign as every main player in the passing game returns to the team. The team’s trio of talented targets — Robert Woods, Brandin Cooks and Cooper Kupp — all have the ability to be Top-20 receivers in fantasy, though it will be hard for any of them to crack the Top-10 with how much of the targets they are sharing with each other. Prior to Kupp’s ACL injury last season, all three of them were ranked as Top-20 WR, and, although he didn’t fully fill Kupp’s absence, Josh Reynolds showed that he can be productive and worth a flex play in deeper leagues.

The tight end position has more question marks, as Gerald Everett and Tyler Higbee are both guys that don’t inspire a lot of confidence among fantasy players. That point is proven with the fact that Jason Witten (who is returning from a year in the broadcast booth), Martellus Bennett (who is not on a roster) and Rob Gronkowski (who is RETIRED) all have higher ADPs than the Higbee and Everett — granted that is simply a difference of getting drafted and not, but still. Everett only had one week with at least eight FPTS last year (the MNF game against the Chiefs when he scored two TD), but he definitely has the talent to put up fantasy worthy numbers if he gets more looks in the passing game.

Where most people have concern is with the running backs, specifically Gurley. TGIII finished as the highest scoring running back in fantasy last year, but issues with his knee (as well as the team having sealed a playoff spot) resulted in him missing the last two games of the season. When he is healthy there is no question that he is arguably the best running back in the league, but the health questions do bring a cause for concern and the Rams will reportedly “maintain” his workload this season. That opens the door for Malcolm Brown — currently listed as the No. 2 RB on the team’s depth chart — and rookie Darrell Henderson, Jr., to carve out roles in the offense. Brown appears to be the guy to take over if Gurley were to be sidelined with injury, and should be rostered as the main handcuff.

The NFC West is not as close of a division now that it was two years ago in 2017 when only five games separated the first and fourth place teams, and the San Francisco 49ers had the best record among last place teams (6–10). But even so the Rams still have some tough inter-divisional competition in the Seattle Seahawks, the 49ers will hope for a full season with Jimmy Garoppolo and the Cardinals could outperform their expectations and put up a fight (maybe).

My prediction for the 2019 Los Angeles Rams is that they will finish with an 11–5 record in the regular season, win the NFC West division, win the NFC conference championship and hoist the Lombardi Trophy at the end of the season as the Super Bowl champions. Keep in mind that I correctly predicted the Super Bowl matchup and champion in our season predictions last year, so you can schedule that ‘Super Bowl Champs’ tattoo appointment any time.